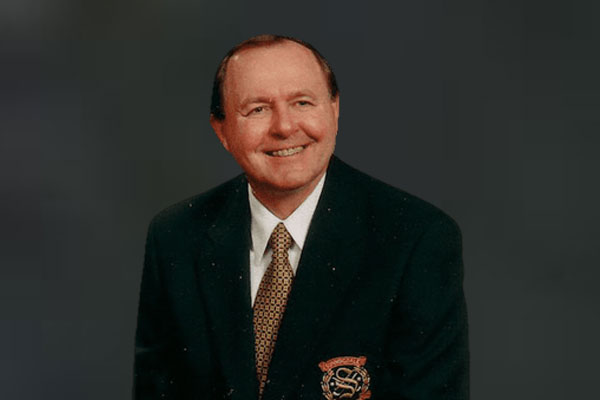 Prior to being named Chair of Intercollegiate Athletics, Semotiuk was Western’s head football coach from 1975-83. The Mustangs won two National Championships and seven OUA Crowns during this time and Semotiuk received both OUA and CIAU Coach of the Year recognition.

During his own athletic career, Semotiuk was a five-year standout for the football and basketball teams at the University of Alberta where he earned undergraduate and graduate degrees in physical education. A captain of both squads, Semotiuk was named Athlete of the Year at Alberta during his final season and played for Canada’s National Basketball Team in 1965-66.

Under Semotiuk, the Mustangs have won 159 League Titles and 14 National Championships. There have been 162 Western athletes who have earned CIAU All-Canadian honours – a record among the top five athletic programs in the country. More significant than these competitive accomplishments however, is Western’s record of academic success. Since the CIAU Academic All-Canadian program was launched in 1990, 447 Mustang student-athletes have earned this coveted accolade. In 1999-00, a total of 101 UWO athletes earned this honour – the highest total among OUA institutions and the second-best total in Canada. Additionally, 64 athletes also received OUA Academic Achievement Awards, which means that approximately one in four Mustang athletes were members of the Dean’s list last season.

Dr. Semotiuk has served as a thesis supervisor, examining board member and chairman for over 50 M.A. candidates. He has served as external examiner on numerous M.A. thesis and Ph.D. dissertations and has been a visiting professor in Australia, England, the former U.S.S.R. and East Germany, Hong Kong, Taiwan, Japan, China, Venezuela, Cuba and Germany. He has been the recipient of numerous research grants and has published and presented extensively in the following areas: comparative and international sport and physical education, sport and politics, Canadian public sports policy, sport coaching and Canadian interuniversity sport.

Professor Semotiuk served as co-editor for the Journal of Comparative Physical Education and Sport (JCPES) for six (6) years, has been the Research Coordinator for the International Society for Comparative Physical Education and Sport (ISCPES) and is currently the President of that international organization. He has also remained very active in the administration of interuniversity sport at all levels. He has served on every OUA Committee at least once, has been a successful convenor of two high-profile sports (basketball and football) and currently Chairs the League’s Marketing and Television Committee. Semotiuk is also completing six years on the Board of Directors and Executive Committee with the CIAU and 12 years as Chair of the CIAU International Committee. He served on the Executive Committee of the London Alliance, which won the hosting bid for the 2001 Canada Summer Games. Finally, he has a long-standing involvement with FISU and the World University Games, serving as a member of the Sports Regulation Committee and Canada’s Chef de Mission in 1989 and 1991.

He has received numerous awards/honours recognizing his academic, professional, athletic and coaching achievements. Dr. Semotiuk has been elected as an International Fellow for the American Academy of Kinesiology and Physical Education (AAKAPE). He has recently been presented The J.P. Loosemore Memorial Award which is presented “to a person who has contributed to the advancement of athletics in Ontario Universities during their career. The recipient must reflect the best in University Sport in terms of ethics, integrity and honesty and is evaluated on their administrative contribution to University Sports.” In June 2002, Semotiuk was presented the 2000-01 International Region National Association of Collegiate Directors of Athletics (NACDA)/Continental Airlines AD of the Year Award. This prestigious award “recognizes administrative excellence within the campus and/or college community environment.” He also was the recipient of the Austin Matthews Award from the Canadian Interuniversity Athletic Union (CIAU) which “is presented annually to an individual who has made an outstanding contribution to interuniversity sport as demonstrated by his/her long term commitment and leadership as a coach, director, chairperson and/or executive committee member at the local, provincial and/or national levels of Canadian interuniversity sport.” Semotiuk is the only athletic director in the country who has received all three of these major regional, national and international awards – an outstanding tribute to his exceptional leadership abilities.

In January 2002, Dr.Semotiuk was named to the City of London’s 2002 Mayor’s Honour List for his contributions in the area of community development in sports. Darwin was inducted into the University of Alberta’s Sports Wall of Fame in Edmonton in May,2002 and into the Ontario Universities Athletics Basketball Hall of Fame (Kitch MacPherson Award) in April 2003. In May 2005, Dr. Semotiuk was inducted into the University of Western Ontario Mustang’s Football Wall of Champions (4 more times since 2005) and more recently into The University of Western Ontario’s “W Club” Hall of Fame. Dr. Semotiuk was named the City of London’s ‘Sportsperson of the Year’ in January 2010.In the summer of 2010, Dr. Semotiuk served as one of the Tri-Chairs for the very successful, award winning, 2010 Special Olympics Canada Summer Games held in London.

In February 2014, Dr. Semotiuk was named a recipient of the prestigious Western Humanitarian Award, recognizing his efforts in overseeing humanitarian work in education, sport and physical activity in Cuba.